What a year for high precipitation and high river flow. Although this is not preferred by the angler, water will be abundant for the next generation of salmonids that are at record low numbers, partly due to poor water conditions. Fishing conditions have been most favorable for the Chetco and Smith. The upper Trinity River has also provided more opportunities for fishing due to river conditions. Most rivers will be closed for Steelhead fishing in April except the Smith will remain open through April and Mainstem Eel River until notified (See Regulations). Rivers are expected to rise on Saturday and descend on Sunday.

Ocean fishing is coming near! There have been some good reports of Surfperch. Rockfish season is opening May 1 and Pacific Halibut is expected to open around May 1 also. Recreational Ocean Salmon Regulations for OR/CA Border to Horse Mountain (Shelter Cove) are Closed April 1-30, 2017 (season will be decided in April). Horse Mountain (Shelter Cove) to Point Arena (Fort Bragg) Opens April 1-30, 2017 minimum size limit: 20 inches total length daily bag limit: 2 salmon of any species except coho. Regulations in effect on or after May 1, 2017 will be adopted at the Pacific Fishery Management Council (PFMC) and California Fish and Game Commission (FGC) meetings in April. April 2017 salmon regulations are pending Office of Administrative Law review and approval. 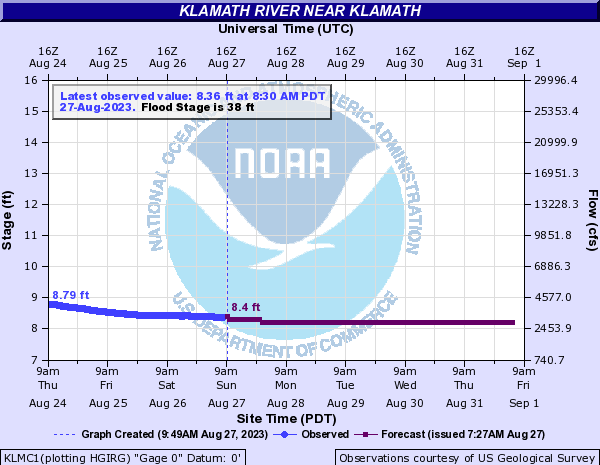 Smith – Similar river and fishing conditions to the Chetco. Good reports of Steelhead in the system. Conditions not looking favorable this weekend for Steelhead. Side drifting and roe have been good for Steelhead.

Trinity River- Most reports are good for Steelhead on the Upper Trinity where conditions are more favorable. Flies, plugs, and side-drifting have been working for Steelhead. The numbers of returning Steelhead to the hatchery have declined the past weeks. There have not been any new reports for the CDFW Trinity River Trapping Summary.

Mad River –There were some reports of fish caught last weekend but the river has been high and turbid ever since. Fishing closes on March 31 and does not look favorable this weekend or into next week. Side drifting and roe have  been effective for Steelhead.

Van Duzen-  Conditions were clearing up this past week as Steelhead should be in the system. River flow should be ascending this weekend and coming down next week depending on the amount of precipitation. There may not be any favorable conditions before the river closes for fishing on March 31. Side drifting and roe have been most effective for Steelhead.

Eel River/South Fork – Van Arsdale fish count station reported some new Steelhead. River conditions have not been  favorable on the main stem due to high flow for the main stem, however the South Fork Eel River was good for fishing this past week and there were finally some good fishing reports of Steelhead being caught! Rivers are predicted to ascend this weekend with a slight chance of rain next week and conditions may not become favorable for the South Fork before the river closes on March 31. Side drifting have been effective for Steelhead.

OR/CA Border to Horse Mountain (Shelter Cove) are Closed April 1-30, 2017 (season will be decided in April).

Regulations in effect on or after May 1, 2017 will be adopted at the Pacific Fishery Management Council (PFMC) and California Fish and Game Commission (FGC) meetings in April. April 2017 salmon regulations are pending Office of Administrative Law review and approval.