The sun is starting to shine after a winter of  high precipitation!

Fishing conditions have been most favorable for the Smith River although fishing has been slow and the last day of the season will be April 30th. The Chetco River flow has been too high for fishing and closes today. The upper Trinity River has provided more opportunities for fishing due to river conditions. Most rivers will be closed for Steelhead fishing in April except the Smith will remain open through April and Mainstem Eel River from the mouth to South Fork Eel River is open all year (See Regulations). The Chetco River, Redwood Creek, Mad River, South Fork Eel River, Van Duzen River and Mattole River will close for fishing today on March 31.

California’s recreational salmon fishery will open in ocean waters on Saturday, April 1, 2017, from Horse Mountain (40° 05’ 00” N. latitude) south to the U.S./Mexico border. The recreational salmon fishery north of Horse Mountain will remain closed for all of 2017 due to historically low numbers of Klamath River fall Chinook salmon. (Read More). Ocean conditions are not looking favorable this weekend with SMALL CRAFT ADVISORY IN EFFECT THROUGH LATE SATURDAY NIGHT.

Smith – Decent reports of Steelhead entering the system and should be making their may back down river. Conditions may be favorable this weekend for fishing and season ends April 30th. Side drifting and roe have been good for Steelhead. 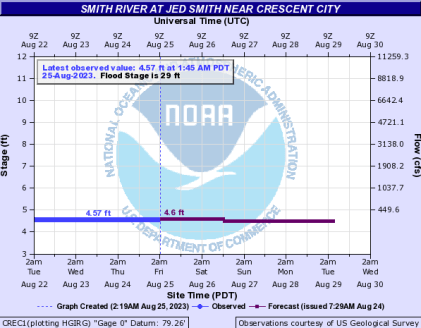 Trinity River- Some Steelhead on the Upper Trinity as well as Brown Trout, where conditions are more favorable. Flies, plugs, and side-drifting have been working for Steelhead. TThere have not been any new reports for the CDFW Trinity River Trapping Summary.