Historically low numbers of fall-run and winter-run Chinook salmon have prompted the California Fish and Game Commission (FGC) to drastically limit the state’s salmon fishery for 2017.

Reports in the Shelter Cove area have been good and reports of an abundant amount of krill for them to feed on.

Reports for Lingcod  and Rockfish reports have been good with other good reports of Petrale sole and California halibut in the bay .

There is a 10-fish maximum for Rockfish, Cabezon and Greenling (RCG) Complex bag limit.

The Rockfish season for boat-based anglers will start May 1 to Oct. 31 within 180 feet and Nov. 1 to Dec. 31 with no depth restrictions.

A sub-bag limit is now allowed for 1 Canary rockfish;  sub-bag limit of 3 black rockfish within the RCG 10-fish complex bag limit; a Lingcod bag limit of 2 fish; Petrale sole and Starry flounder can be retained year and at all depths.

For more information, visit our Sport Fishing Regulations page under Groundfish and follow the Recreational tab or call the hotline at 831-649-2801.

The Pacific halibut opener was good with numerous reports. The bite has been somewhat inconsistent since and have to put in the time. Overall, reports were better than expected.

The CDFW has projected 895 pounds of Pacific Halibut has been harvested through May 21. 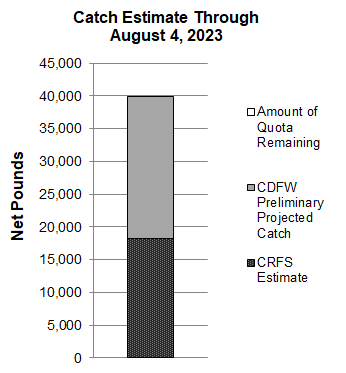 This season’s open dates are May 1-June 15, July 1-15, Aug. 1-15 and Sept. 1-Oct. 31, or until the quota is reached, whichever is earlier. To view the latest catch projection information, visit https://www.wildlife.ca.gov/Conservation/Marine/Pacific-Halibut#31670772-in-season-tracking.

Sport regulations for the Pacific halibut fishery off California are designed to keep catches from exceeding the federally set 2017 quota of 34,580 net pounds.

The fishing season will be open May 1-June 15, July 1-15, August 1-15, and September 1-October 31, or until the quota is projected to have been taken, whichever is earlier.

When angling, no more than one line with two hooks attached may be used. A harpoon, gaff, or net may be used to assist in taking a Pacific halibut that has been legally caught by angling. See California Code of Regulations Title 14, Section 28.95, for additional restrictions on the use of harpoons. Take by spearfishing is allowed pursuant to California Code of Regulations Title 14, Section 28.90.

Reports are good along sandy beaches and bays. Redtail minimum size is 10.5 inches and a daily bag and possession limit of 10.

Abalone season opens on May 1- October 31 north of the San Francisco Bay except July will be closed. Fishing will be allowed from 8 a.m. to one half-hour after sunset. An Abalone report card is required in possession while diving and is also required for 15 years or younger. Fixed caliper measuring device is also required as Abalone must be seven inches or large. Abalone limit is 3 per day and maximum of 3 in possession up to 12 per calendar year.

Most rivers are closed for Steelhead except the Klamath and Trinity. The Smith closed at the end of April. The mainstem Eel River from the South Fork down river is open all year (See Regulations). Eel River conditions are getting better and should provides some angling opportunities as the river descends and clears up. The Chetco River, Redwood Creek, Mad River, South Fork Eel River, Van Duzen River and Mattole River are closed for fishing.

Due to the low numbers of fall-run and winter-run Chinook, the fall-run Chinook will be closed on  the Klamath and Trinity rivers.

Inland, spring-run Chinook fishing will still be allowed through Aug. 14 on the Klamath River and through Aug. 31 on the Trinity River. After these dates, both fisheries will close for the remainder of the calendar year. However, the nearby Smith River will remain open for fall-run Chinook, and there are additional opportunities in southern Oregon rivers.

During the salmon season closure, Steelhead angling will still be allowed in both the Klamath and Trinity rivers.

Smith – Closed April 30, 2017 There were some good reports of Steelhead in the system as they should be making their may back down river. Sections to re-open on May 27, 2017.

Klamath River – Some new reports of Springer salmon on the Lower Klamath (see supplemental regulations). The flows are a little high but has some color. The season typically really gets going in June and will go through July. Steelhead should be in the river system and most likely coming down.

Trinity River- The Bureau of Reclamation released water from Lewiston Dam into the Trinity River that increased on Saturday, April 22, and reached approximately 11,000 cubic feet per second (cfs) by Wednesday, April 26. The peak flow  continued until Friday, April 28.

Caution! Rivers are still high but descending! North Coast rivers can be high and very dangerous. Some portions of the Klamath and Trinity Rivers will be subjected to low flow fishing closures during dry times of the year.